My recent trip to the East Coast was a perfect mix of fun sightseeing in a new place and spending some quality time with family.

Since my parents moved to Rhode Island about three years ago (a state I hadn’t even stepped foot in before), each visit comes with the exciting prospect of being in close proximity to a whole region of New England charm that I have yet to explore.

For this visit, Boston (or Bah-ston as the locals call it), was my playground for new discovery. I came just in time too. Ya see, my plane landed just hours before the crucial game in which the Boston Red Sox won the World Series! It was a blast to hang out at the local pub to cheer them on! The last time I was in Boston (for one night), I ended up in a bar cheering on the Bruins to victory in the Stanley Cup. Perhaps I’m good luck?

Anyway, with its easy (and oldest in the country!) public transit system, the city was easy to navigate around and simultaneously get an American history lesson in the process. After taking transit into the city from where I was staying, I spent a day following the red brick road of the Freedom Trail, a self-guided walk through Boston with markers at the historical buildings describing what happened there during the American revolution and subsequent early years of the new democracy. 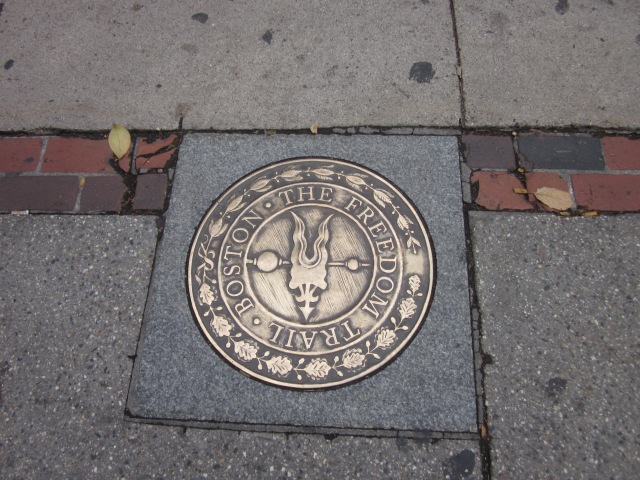 one of the oldest pubs in the nation

The old city hall with our good friend, Benjamin Franklin

Let’s face it, I am not a history buff so I did not spend much time reading about each place, but I really enjoyed viewing the contrast of Boston’s colonial buildings against the backdrop of its more modern skyscrapers. Combined with the vivid colors of changing fall leaves, it made for a very pleasant wandering around the city.

My favorite kind of travel is simply walking. 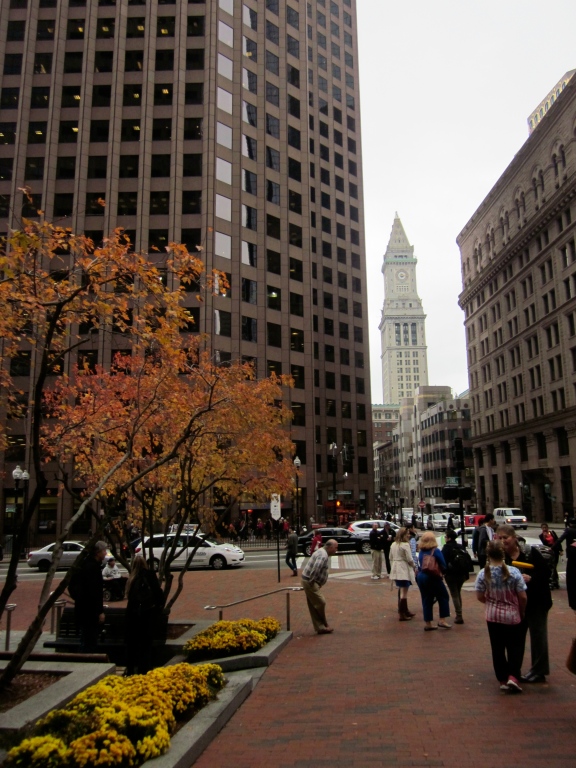 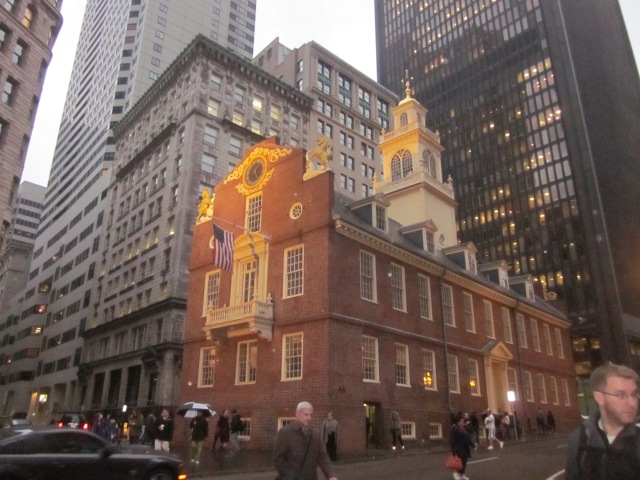 On my second day in the Boston area, I had a partner in crime, my cousin, who also generously hosted me as well. After sitting out a downpour with a morning pastry at the famed Mike’s Pastries in the North End, we walked across the bridge to Charlestown.

The highlight there was taking on the Bunker Hill Monument, walking up all 294 steps to the top to be treated to a glorious view of Boston and surrounds.

Making fun of the local accent in the North End 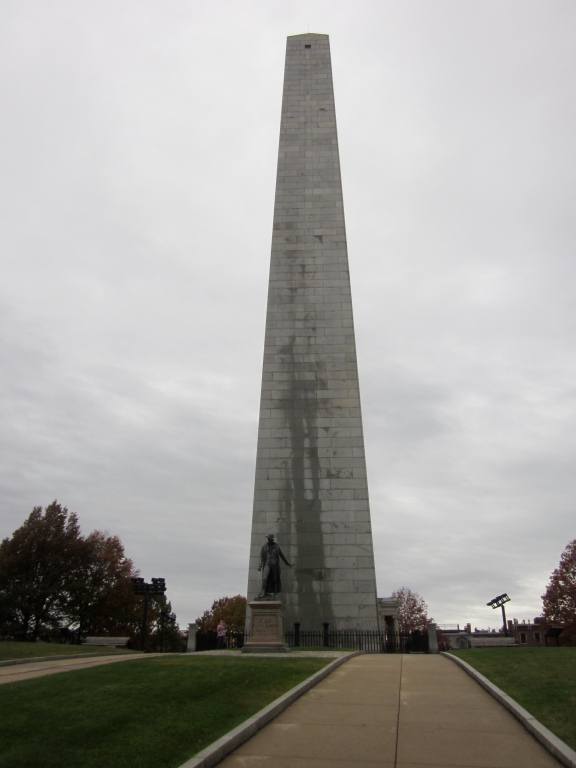 View of Boston from the top

Such pretty trees in Charlestown

After all that walking, it was time for a break and a drink. Harpoon Brewery hit the spot with tasty brews and big fat pretzels to munch on. The day was capped off with a pink sunset and a cup of chowdah. 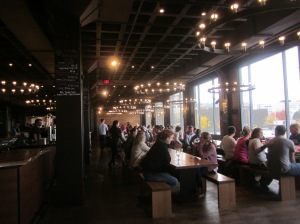 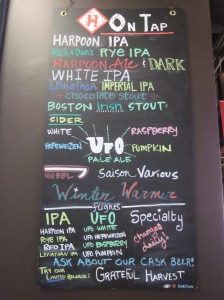 Mid-way through the beer sampler and a pretzel

Once in Rhode Island, it was time to switch gears to family time. My main reason for this visit was to be there for my dad’s big 60th birthday celebration. And the celebration went off without a hitch. Leave it to my parents to arrange a classy party on the top floor of an Irish pub in small-town Rhode Island. 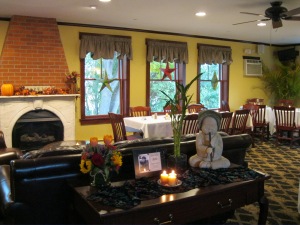 The homemade (yes, homemade!) cake baked and decorated by long-time friends of Dad

It was a night of laughter, memories, learning a thing or two about my dad’s younger years that I didn’t know before and probably should never have known (thanks dad’s college roommates!), and catching up with family who I haven’t seen in a really long time.

And the trees, the trees! They were stunning!

We don’t get this kind of seasonal change in California. No brilliant display of changing leaves, no shift into bone-chilling cold, no need to make sure the snow shovel is easily accessible come November. 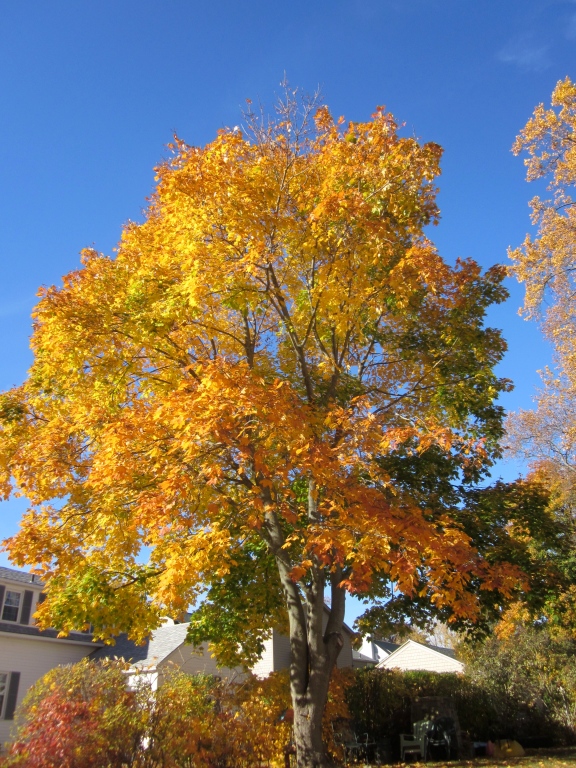 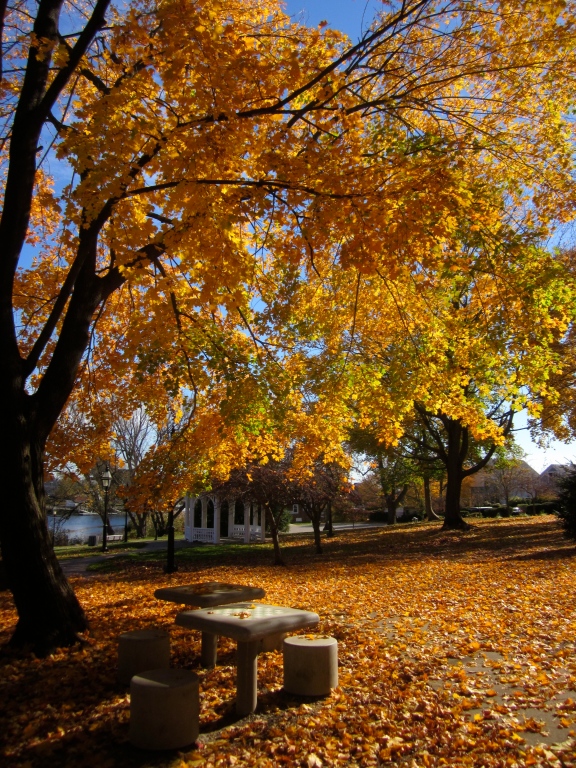 My parents love living in New England, for many more reasons than the weather. They feel at home there. After so many years of tolerating life in the South (which I escaped right after high school), they have come home to the East Coast. However, I feel most at home in the San Francisco Bay Area, and don’t think I’d last long in any place that sees snow on a regular basis. So for now, we are a bi-coastal family.

It’s tough though, this trip provided a reminder that my parents aren’t getting any younger, even as youthful and active as they are. So the goodbyes at the end of the trip become a little harder each time.

I’ve decided that the fall is my favorite time of year to visit the East Coast. I just can’t get enough of those flaming red-orange trees!

Just up the road from my parents’ house

Next year’s New England sightseeing trip is already penciled in the books; I’ve been invited to join my mom and cousin on a hut to hut hike in the White Mountains of Vermont next fall! Woo-hoo!!!

← A summer of local travel
Oh, the places you’ll go! →

Based in the San Francisco Bay area, I write to share my experiences of discovering new places, trying new things, and making connections around the globe... Learn more